Interview with Alison Moore, author of The Lighthouse 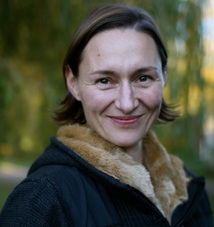 Alison Moore's first novel, The Lighthouse, was shortlisted for the Man Booker  Prize 2012. Her debut collection, The Pre-War House and Other Stories, will be  published in May 2013. Born in Manchester in 1971, Alison lives near Nottingham  with her husband Dan and son Arthur.
www.alison-moore.com
What drives and motivates you generally as a writer?

Reading – it was no doubt reading as a child that made me want to be a writer in the first place, and reading which keeps the momentum going now.

The Lighthouse is your first published novel. Can you tell us about its route to publication?

Through being shortlisted for the Manchester Fiction Prize in 2009, I met Nicholas Royle, who became my agent. He also became Commissioning Editor for Fiction at Salt, who accepted the Lighthouse in 2011.

I’m assuming you’re pleased with the general reception of the novel (including being shortlisted for the Booker prize), but did anything particularly surprise you about others’ readings of the novel?

The general reception and feedback has been overwhelmingly heartening. I am always slightly thrown by people who don’t like reading novels about unlikeable characters. I very much like how novels enable us to get uncomfortably close to people and situations we might be better to avoid in our real lives.

The voice strikes me as remarkably quirky and confident for a first novel. Did you have to resist advice to write more ‘conventionally’?

To be honest, I just write how I want to write. No one suggested I write the novel in a different way, it just seemed to work as it was. My agent/editor and husband both read and liked the early drafts, so there was really no pressure to take a different approach.

The story has been referred to as unsettling and melancholy, but I wonder if it felt that way as you were writing it, and what you particularly enjoyed about the process?

I was very much inside Futh in particular when I was writing it, but his experience and my experience were not the same because of course I also had an overview. I particularly like, if you’re working on a story every day, the sense of it unfolding in front of you, the feeling that you’re going to have to run to keep up with it. I found Futh quite entertaining to write – I do find him really funny and was hugely pleased when some readers and reviewers saw the same dark humour in it.

The central character is an emotionally damaged man, wounded by his mother’s abandonment and somewhat at odds with the world around him. How do you see Futh, and what drew you to his predicament?

He isn’t really capable of leaving the past and the damage behind. It reminds me of having a bad dream and thinking you’ve woken up but you’re only dreaming you’ve woken up and in fact you’ve just shifted into the next strange part of the dream. He’s got a bit stuck. I realise he can be a bit pathetic and annoying, but I like him, I feel quite protective of him, even though ironically I'm responsible for all the dreadful things that happen to him, for blocking all his escape routes.

In contrast to Futh’s disconnection, the novel is peppered with echoes and repetitions, from perfume bottles to infidelity. Did you have fun with this, and was the idea there right from the beginning or did it evolve as the novel progressed?

I did enjoy playing with that sense of everything continually echoing, the foreshadowing, and making the present a kind of grotesque version of the past. It’s something that evolved as I was writing.

What can we look forward to from you next?

My first collection of short stories, The Pre-War House and Other Stories, is being published by Salt in May, and I’m working on my second novel.

Name one book you’d be proud to have written.

I think I will say Waterland (Graham Swift).

Is there anything else you’d like me to have asked you?

I could tell you about some events I’m doing: I’ll be reading with Nicholas Royle (who is a novelist as well as being my agent and editor) at the International Anthony Burgess Foundation in Manchester on Thursday 24 January, and at the launch of Ambit #211 at the Owl Bookshop in Kentish Town, London, on Thursday 31 January. And I’ll be at various festivals during the year including Nottingham Festival of Words, Lowdham Book Festival, Cambridge Wordfest, Melton Arts Festival, Chipping Campden Literature Festival, Listowel Writers’ Week, Prestwich Book Festival and Edinburgh Book Festival. See www.alison-moore.com.

uploaded 22.1.13
Your comments are welcome on any of the Q&A's – click here to post.
See also my post on the role of food in novels inspired by the connections between The Lighthouse and Jubilee