Interview with Charlotte Rogan, author of The Lifeboat 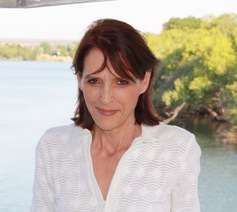 Charlotte Rogan was born in 1953 to a family of avid sailors and naturalists. After studying architecture and engineering at Princeton University, she took a job with a large construction firm. Women on the jobsite were rare and regularly harassed, but she loved getting an inside view into how the pieces of buildings were put together. And she still loves the smell of blueprints and concrete.

Charlotte did not start writing until her mid-thirties, and soon after that, she and her husband became the parents of triplets. Having children focused her—free time was precious! When she hired a babysitter, she would drive out the front driveway past her cheerfully waving children, circle the block, and park in an alley behind the house. Then she would sneak through a back gate and into a room off the garage where her computer was kept, and there she would work until the sitter’s allotted time was up. After 25 years of writing mostly in secret, a chance encounter led to a literary agent who agreed to represent her.

The Lifeboat, her first published novel, was one the 2012 Waterstones 11, a recognition for debut novels published in the UK, was chosen by the Barnes & Noble Discover Great New Writers program in America, and was nominated for the Guardian First Book Award and the Goldsboro Books and Historical Writers Association debut historical fiction prize. The book is currently being translated into 26 languages.

I was in my mid-thirties when I decided I wanted to learn how to write. While I took a couple of creative writing workshops to get started, I was mostly self-taught, fitting writing into the corners of time that are part of any stay-at-home parent’s day. Over the course of 25 years I completed 5 novels and published nothing. When my children were seniors in high school, a chance encounter led me to my current literary agent, who sold The Lifeboat to Little, Brown. My kids were concerned about what I would do once they left the nest, but they needn’t have worried!

When I first contacted you to ask if you’d be willing to be interviewed for my website, you said you’d be happy to do so when you got back from your travels in several weeks’ time.  If this travel was in relation to promoting your novel, I wonder what that’s like and whether that represents a radical change to your lifestyle?

The recent travel was actually a research trip for my next novel, but the publication and promotion of The Lifeboat was definitely a life-changer. For one thing, I had no previous experience in public speaking, and suddenly I was thrust into—well, limelight is far too grand a word—but I was completely terrified at the prospect of public  appearances. I learned very quickly, however, that I would not faint dead away and that the audience wouldn’t throw things. The best part of it all was that I got to meet a lot of book people—readers and writers and publishing types. I came out of the writing closet to find a wonderful new world of people who get excited about the same things I do.

I’m assuming you’re pleased with the general reception of the novel, but did anything particularly surprise you about others’ readings?

I am more than pleased—actually quite stunned. The thing that surprised me most was the realization that the readers are the ones who complete the story. The Lifeboat uses ambiguity to explore how much any person can know about events, about others, about oneself, etc.—but this ambiguity also gives readers many opportunities for individual interpretation of the text. My discussions with them have shown me that reading is a creative act, that the story isn’t complete until the reader engages with it.


I keep changing my mind about how much control I think Grace has over her own destiny.  Sometimes I think she’s a psychopath, incapable of guilt, witnessed in her blatant disregard of Felicity, his fiancée, when she decided to court Henry and his fortune.  At other times, I see her as possessing an unusual wisdom in her acceptance that some things are inexplicable and her amusement at the folly of a legal system that attempts to judge the actions of people fighting for survival from a position of comfort and safety.  Is that a satisfying reaction for you as the author to have evoked?

It certainly is. I love that readers find themselves shifting right along with Grace. It was very interesting to write about a character who was unreliable and opportunistic—which sound like such negative character traits until we realize that they are also very adaptive ones. And I agree with your comment about judging. The business of the law is to tell a story in a way that allows us to judge it, but I wanted to tell it in a way that shows how hard it is to judge people for the things they do in situations we have never faced, never even contemplated. The contrast between these two types of storytelling is one of the reasons I wanted to end the book with Grace’s trial.

How did you discover Grace’s voice, and find the balance between evoking the reader’s sympathy for her predicament while leaving so much open to interpretation?

Grace’s voice came to me after I found and read my husband’s criminal law text, which contained two fascinating cases where lifeboat survivors were put on trial after being rescued. When Grace first came to me, she was defending herself for things that had happened in the boat. As I listened to the voice and started to write the story down, I realized that Grace was not only unreliable, but manipulative as well. But I loved her, and perhaps
that accounts for any sympathy she evokes. I think an author has to love his or her characters, even if the characters aren’t particularly likeable. My mother used to quote William James, who said: “I never knew a man I didn’t like.” Getting to know someone always makes us more empathetic.

Deciding what to spell out and what to leave open is a judgement call any author has to make. Some readers are frustrated by ambiguity and others see it as a kind of invitation to enter the story. I tend to dislike novels that neatly wrap everything up at the end, so I decided not to do that.

One of the questions the novel addresses is what enables some people to survive when others don’t make it.  Grace reflects on her ambivalent response to an earlier crisis:
It might have been a manifestation of my mother’s passive streak that tempted me to throw up my hands and hope to be rescued, but I also had some of Miranda’s decisiveness in me – perhaps the same decisiveness that had persuaded my father to shoot himself rather than face the humiliation of poverty, which goes to show that admirable traits are often exactly the same as negative ones, only
expressed in a different way.
(p81)
Do you think this adaptability to different circumstances is what gets her through the ordeal of the lifeboat and her trial?

I think adaptability is the number one indicator of survival. Bending rather than breaking and all that.

I was also curious about your setting the novel in 1914, and how much that had to do with the practicalities of transatlantic shipping and how much the changing position of women that might have given Hannah and Mrs Grant the confidence to challenge Hardie’s authority?

I never set out to write a historical novel, but 1914 seemed a perfect year for a lifeboat story in so many ways. The era of the sailing vessels was past, which brought many more women onto ships as passengers. As you say, the status of women was changing, but the gender issues they faced were still profound—and certainly starker than they are today. In the wider world, too, the old order was giving way. Hannah and Mrs Grant are quite
modern in many ways, but they also embody traditional feminine/mystical qualities that attract the other women when the authoritarian/patriarchal qualities of Mr Hardie, which seemed so useful in the early stages of the disaster, fail to get them rescued.

What did you most enjoy about writing The Lifeboat and what did you find most challenging?

Plot is very challenging for me. The aspects of writing that first fascinated me had nothing to do with plot or even story. I loved that sentences had surface as well as meaning and depth. I loved that characters had hidden motivations as well as complex psychologies and physical needs. I loved that a single moment in writing could spin on for pages, taking in sensation and memory, future and past. But most readers not only want interesting characters and good writing when they pick up a novel, they want a compelling plot. The Lifeboat was my attempt to pay attention to the story without sacrificing the other things that interested me. The process of writing can be both frustrating and immensely satisfying. My favourite part is when I feel I have gotten a sentence or a character right.

What drives you generally as a writer?

Writing is a way of making sense of experience. It is also a way to pay tribute to the beauty of the natural world and to the thing in people that strives to do the right thing regardless of the cost to themselves. In addition, fiction has the ability to pose questions without being expected to answer them. It is the perfect vehicle for exploring the big questions, the questions for which there are no good answers.

There are so many, but I am going to say The Death of Virgil by Hermann Broch. This is a novel, but I have never read it straight through. I read it for the language. A single paragraph can sustain me for days.

You did very well covering the bases!

Thank you for sharing your thoughts about your writing and all the best with your future projects.

uploaded 24th May 2013
Your comments are welcome on any of the Q&A's – click here to post.
See also my post on making life harder for your protagonists inspired by the connections between the first three author interviews.