Interview with Emma Healey author of  Elizabeth Is Missing 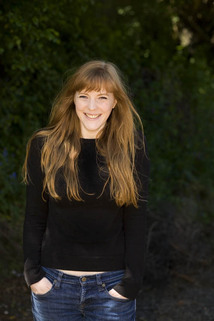 Photo credit Martin Figura
Emma Healey wrote her first short story when she was four, told her teachers she was going to be a writer when she was eight, but had learnt better by twelve and had decided on being a litigator (inspired entirely by the film Clueless). It took another ten years to remember and attempt to follow her original ambition. She grew up in London where she completed her first degree in bookbinding and was the third generation of women in her family to go to art college. She then worked for two libraries, two bookshops, two art galleries and two universities, and was busily pursuing a career in the art world before writing overtook everything. In 2008, after the death of one grandmother and the decline of the other, she began to explore the idea of dementia in fiction, and she moved to Norwich in 2010 to study for the MA in Creative Writing at UEA. Elizabeth is Missing is her first novel.
www.emmahealey.co.uk
Congratulations on your soon-to-be-published debut novel.  How does that feel right now?

Very strange! This story is something that has lived inside my head for so long and it's difficult to think of it having a life of its own beyond my reach. But, of course, it’s really wonderful too - it's what you hope for as a writer and I'm so grateful to everyone for reading and responding to the novel.

Tell us about the novel’s path to publication and what else has to happen before the launch in June?

I worked on the book for two years before I began the MA at UEA, then at the end of the MA year my dissertation (15,000 words of my novel-in-progress) was put up for the Curtis Brown Award, I didn't win (one of my best friends very deservedly did) but Karolina Sutton at Curtis Brown got in touch to say she had liked what she'd seen so far and would I send her the rest when I was finished. I sent her the full first draft about a year later and signed with her before reworking the book over the next four months. I finished the second draft just after Easter, just in time for the London Book Fair. Things moved very quickly after that. I know there are bits and pieces of publicity that I need to do – in the UK, but also other countries (first stop Germany) – and I’m looking forward to that, but all the writing and editing is done. 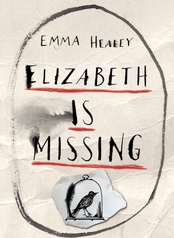 What drew you to the character of an eighty-one-year-old woman with significant memory problems?

Writing from the point of view of Maud was incredibly freeing. Knowing that people couldn't assume I was writing autobiography I felt I could make observations and have the protagonist express opinions without shyness. I also I wanted to try and understand what was going on inside the heads of the various members of my family with dementia (five at the last count) and writing was a great way of exploring the subject.

The double mystery is perfect for a story about dementia, when even ordinary life is a puzzle. Did you know, right from the start, that the novel would have this type of plot?

The initial inspiration for the book came from my father's mother who has multi-infarct dementia. I was in the car with her one day and she told me she didn't know where one of her friends was - she'd tried calling, but got no answer. Luckily they had a mutual friend who knew that the 'missing' woman was staying with her daughter, and my grandmother was still in the early stages of dementia so she could hold onto the answer. That was the end of the mystery in real life, but it got me thinking about how that might translate to fiction. Then while researching the condition I found that sufferers often repeat certain patterns of behaviour based on their previous occupations or experiences (if you were an avid gardener you might still go out every day to prune the roses, only the roses are gone, or you’re cutting all the flowers off, etc) and this gave me the idea for the dual narrative – if Maud lost someone in the past, the memory of that might push her into repeating that kind of investigation in the present.

Maud’s voice is delightful and it’s impossible not to warm to her, yet she also reveals other people’s frustration with aspects of her behaviour. How easy did you find it to achieve this balance, while narrating entirely from Maud’s point of view?

I love reading between the lines in other books and I can’t stand being told too much – it’s infinitely more satisfying to guess at the motives or personality of a character. And a lot of the fun of writing is in leaving those gaps for the reader so that they can bring their own thoughts and ideas to a story. While I was writing the book I had lots of advice to add in another character’s voice to explain what was going on, but I thought it would be cheating and felt it was really important to stick to the one point of view, even if it is at times claustrophobic.

Her various lapses and omissions are both a credible depiction of the experience of dementia and an extremely inventive plot device. How did you keep track of the different versions of reality as you were writing the novel?

I am a lover of lists and plans and I kept several of both while I wrote. The main things I used (this might get tedious, so apologies in advance) were a plot summary – divided into chapters with the main events of each scene described, the names of any characters involved in bold, the present-day scenes in roman text, and 1940s scenes in italics. At first all the scenes were also colour-coded so that I could see what had yet to be written, what had been drafted, what re-written and what workshopped. I used timelines, one for the present-day and one to keep track of the 1940s story (as that part of the plot is not always chronological). I also drew floor plans of Maud’s house – one of the house now and one during the 1940s – of Helen’s house and of Frank’s so that I could see where things might be and make sure I described the characters’ actions accurately. And I made a map of the local area for the same reason.

What did you most enjoy about writing Elizabeth Is Missing and what did you find most challenging?

Getting stuck into editing a chapter, trying to find the ends of the thread and pull them through so the section is complete and coherent – that’s when I was happiest. I loved having Maud as company too. I often thought about how she might react to situations I found myself in. I feel a bit bereft now that I’ve completed the book.
Sometimes I did find myself in a tangle with the plot and that was very frustrating, but the most challenging thing is to keep going. It’s so much easier to not write than to write.

As you can probably tell from my laborious answer above, I am a planner! But I need to be because I never write in sequence. I like to be able to write whichever scene I feel most inspired to write (until I’m left with the scenes I really have to get on with willingly or not). I think this stops me from writing those continuity scenes that end up having to be cut and I always write better when I’m fired up rather than plodding on.

I took some of Anne Aylor’s courses in London when I was beginning the novel and one thing she advocates is not getting distracted by too many different writing projects. This was really important for me as I was working full-time while writing a lot of the book. Lots of people also write short fiction or flash fiction, etc, and that works for them, but I know if I’d tried to think of ideas for those as well I’d never have finished the book.

The worst was probably the advice above – that I should add another voice to Maud’s to make the novel clearer, it would have totally spoiled it.

Your Twitter profile says all your words are in the book and there are none left in your head! Is this true and how will you respond when readers start begging you for more?

Ha ha! That was just something I said at the pub quite soon after finishing the book and found I couldn’t think of anything to say to my friends! I’m sure there are a lot of words I haven’t used and I can certainly recycle some too.

Alison Moore’s The Lighthouse (quite appropriately for this site!). I was amazed by this book. It was so masterful – gripping but restrained, poetic but not self-conscious, dark but also funny. I loved it and was very jealous of it too.

There has been a lot of debate recently about whether main characters or protagonists need to be 'likeable' and that seems to be relevant to Maud too. I'd say for a book to be 'good' the answer is no, but for me it is definitely important. That doesn't mean that the character should be flawless (far from it), but I did think it was important to make Maud a character that readers warmed to, especially as I was asking them to go on quite a difficult journey with her.

Thank you for sharing your thoughts about your writing.
uploaded 8.01.14
Share your views on this or any other debut novelist Q&A on my blog post: A novel approach to 6 degrees of separation
Blog posts Old Age: a Danger Zone for Writers? and Literary Dementia also feature Emma's novel