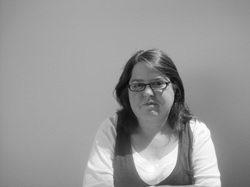 Harriet Lane's debut novel, ALYS, ALWAYS, was published in 2012 to widespread acclaim ('A brilliant idea, brilliantly realised', Daily Mail; 'Compulsive reading', Spectator; 'An exceptional first novel', Financial Times).  Before that, she worked at Tatler and the Observer, and also wrote for the Guardian, the Telegraph and Vogue. W&N publishes her second book, HER, in April 2014.
http://www.harrietlane.co.uk/
Congratulations on the publication of your debut novel.  How does it feel to have it out in the world?

Odd, exciting, scary. A bit of a dream.

Has anything surprised you about the reception it has had and/or in others’ readings of the novel?

I know how hard it is for a debut novel to get noticed (I used to work at the Observer and did some book-reviewing there), so I approached publication with very low expectations. But the book got quite a bit of attention, and all the reviewers seemed to get it (and I do think it’s a book you either get, or you don’t). I hadn’t dared to hope for that.

Alys, Always is a beautiful exploration of the dual-edged nature of envy.  Meeting the privileged Kytes confirms for Frances her dissatisfaction with her own life and motivates her to do something about it.  On the other hand, she despises the family and doesn’t mind if she spoils what they have in her own quest for self-improvement.  What’s your take on Frances’s envy?

Yes, Frances is all about want. She desperately wants to escape, she desperately wants a different sort of life. That sort of envy is, I think, pretty bad for you, and I try very hard not to give into it myself. But it’s the beating heart of the novel, and it certainly felt like very rich material.

A commonality in the Q&A’s I’ve done so far is the authors’ empathy for their characters, even those who are difficult to like.  (Frances is like Grace in The Lifeboat in her determination to forge a better life for herself, whatever the cost to others.)  In some ways, it’s like a mother’s affection for a wayward child.  Does that ring any bells for you
regarding your relationship with your creation?

It’s not a relationship I can compare to any other, really. Frances thinks and does the things I don’t allow myself to, things that wouldn’t even cross my mind; and yet there they are, on the page, in black and white. When I was writing the book I was constantly startled by Frances’s behaviour. I was working to an outline, I knew where the story was going at every point, but the little details (the moment early on when she dabs something -- some lint, or maybe some mustard, maybe nothing at all -- from Laurence’s sleeve; the episodes of light kleptomania) took me by surprise. It was a sequence of small and rather delicious shocks. For this reason, she was extremely good company while I was writing the book and I missed her when it was all over.

You’ve said elsewhere that you probably wouldn’t have written a novel if you hadn’t had to give up work through illness.  Do you think Frances is so compelling as a character partly because of your own need to occupy the mind of someone who was determined to take control of her situation?

That’s part of it, I’m sure: Frances’ determination to grasp her own destiny, to engineer her own fate, has a terrific appeal. I’m losing my sight to a mysterious auto-immune disorder so writing from the point of view of a character who gradually asserts control over her life, and the lives of other people, was a weird sort of wish-fulfilment, I guess.
But also the wonderful thing about writing fiction (like reading it) is being allowed to inhabit the minds of people quite unlike yourself. To live another sort of life.

Frances’s voice is pitch perfect.  I love the economy of the descriptions and the laugh-out-loud set pieces of her interactions at work and with her parents.  Yet it’s also very poignant: she’s desperately lonely and emotionally deprived.  It reminds me of Nick Hornby’s work which I think displays a rare talent for combining psychological depth with humour. (Even your title echoes Juliet, Naked, not just in the rhythms but how it pulls the reader into the book to find out what it actually means.)  Yet the reviews I’ve seen hone in more on the creepiness and suspense.

I’m delighted you found the humour in it. I think Frances’s wit is key to her voice. You have to find her amusing, I suppose, in order to want to follow her.

Another thing I love about the novel is the way you handle Frances’s motivation.  We aspiring novelists are often told that narrative tension depends on clarifying at the outset what the protagonist wants and thwarting her attempts to achieve it.  You subvert this in a way that I think is more in tune with the reality of human motivation: what Frances wants is quite vague at the  beginning and is gradually shaped by circumstance.  Later, when she develops her plan, the details are withheld from the reader.  Were you conscious of going against the grain as you were plotting the
novel?

Frances holds back in her everyday life, and so it made sense to me that she would do the same on the page. That’s key to understanding her character.
I knew from the off that the novel would depend on the slow reveal of her personality (perhaps as her ambition dawns on her, though I think this aspect of the book is open to interpretation). A reader generally comes to a novel -- especially a novel with a first-person narrative -- presuming that he or she is in ‘safe hands’. You take a lot for granted, and I thought it would be fun to explore that assumption. So it was important that at the beginning of the book the reader quickly identifies with Frances (though there are several early clues that she’s perhaps not entirely straightforward, and those clues are vital; I didn’t want anyone to feel tricked or misled). Later on, when you’ve got to grips with her, I guess you keep reading to find out how far she will go.

One question from another reader is regarding a possible decrease in conflict with the ending.  Was this resolution what you originally intended or did it develop over the course of writing and editing?

I always knew that I wanted Frances to get away with it. I didn't want to see her punished. I guess I think that women like Frances don’t often get away with things in fiction.

What did you most enjoy about writing Alys, Always?

I hadn’t written fiction since school, and so -- after a career in journalism -- I found the absolute freedom of making stuff up rather mind-blowing.  So exciting, so full of possibility. I heard Philip Pullman on the radio recently saying something like ‘Writing is totalitarian, reading is democratic’ -- and there is something so true about that. My book, my rules.

I understand that the first draft came very quickly and I wondered if your background as a journalist was an asset in this regard?  I’m thinking, for example, the experience of producing written work to tight deadlines.

I’m sure it did. I’m used to writing quickly and clearly, and actually the process of polishing the book and re-drafting was much more to do with adding in stuff -- to slow things down at a crucial moment, or developing other characters -- than cutting. As long as I know where I’m going, I seem to write fairly cleanly.
And possibly my background in journalism means I don’t take readers for granted. When I wrote Alys, Always, I was  constantly watching for moments when the story might be in danger of flagging.  All the klaxons go off when I am bored, whether I’m reading or writing. That was a help in keeping the story tight and focused.

Plus the sensation of writing in every spare minute of every day, being in Frances’s head for an 11-week period (the amount of time I took to write the first draft, during which the house filled with takeaway cartons and baskets of dirty laundry, and my children never brushed their teeth or hair) meant that I was deep in the story, carried along by its momentum. If I ran into difficulties with a scene, a solution generally presented itself overnight. I think Stephen King calls this 'leaving things to the boys in the basement'.

And the other side of this, was there anything in your journalistic background that got in the way of writing a novel?

I absolutely loved the ‘making stuff up’ side of things, but it also felt a bit ridiculous at first. I had to get over that.

Did it impact on your path to publication?

No, I don’t think it necessarily helped in other ways. Now I think about it, the only newspaper where I knew the literary editor was the only broadsheet not to review the book.
I was never a very clubbable sort of journalist, I didn’t have that many strings to pull when the book was published. And I knew that even if hacks who remembered my by-line happened to pick up an advance copy, they’d put it down pretty quickly if it wasn’t doing what it needed to do.

It’s called HER, I’ve just delivered the final draft to Arzu Tahsin, my spectacular editor at W&N, and it’s scheduled for publication in April 2014.  It’s about female friendship and early motherhood, and the confusion of identity (loss of identity, sometimes) that can accompany that.

Only one? But I can’t choose! Rebecca, Dusty Answer, The Talented Mr Ripley, The Haunting of Hill House, The Little Stranger.

Thank you for sharing your thoughts about your writing.
uploaded 4.10.13
General comments welcome on annecdotal
Or join the discussion on character motivation in 7 debut novels, sparked by my curiosity about Frances.

See also my review of Alys, Always on The Treacle Well.