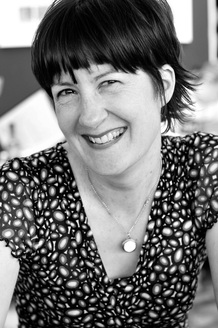 Shelley Harris was born in South Africa and emigrated to Britain at the age of six. Romantically, she wrote her first novel in Paris, in a tiny bedsit near the Musée Beaubourg. Less romantically, she was too nervous to send the manuscript to agents, so she stuffed it in a drawer and did other jobs instead. She has been a local journalist, a secondary school teacher, a filler of envelopes, an assistant in a wine shop, and a bouncer at teenage discos.

When she returned to writing she drew on fragments of her past to produce Jubilee. The novel is about an iconic photograph taken at a Silver Jubilee street party in 1977 – and about the boy at the centre of that photograph.

The Guardian called Shelley ‘a new novelist whose next book you are already impatient to read’, and The Independent said Jubilee was ‘remarkably assured…shrewdly observed…pitch-perfect’. The novel was shortlisted for the Commonwealth Book Prize, chosen as a Richard and Judy Summer read, and was a Radio 4 Book at Bedtime.
www.shelleyharris.co.uk
When I asked if I could interview you for annethology, you suggested we try it as a back-and-forth dialogue. What appeals to you about this approach to exploring your writing?

I think to do otherwise suggests that I control the way the novel is read – and that’s not really my view of reading. Of course, there are some things only I know (like how I wrote it, where I got my ideas from etc.), but outside that, there are so many things in a text which you produce unconsciously, or are interpreted plurally by readers, that a discussion is better than a pronouncement. But actual discussions – rather than an emailed list of questions you answer and then ping back – are unusual now.

So there’s the potential for discovery for both of us in this conversation, and your perspective on readers as much more actively involved in constructing their experience of the novel certainly fits with mine. In relation to your novel, Jubilee, have there been any readings or interpretations that have particularly surprised you?

Sometimes readers spot things I’ve missed completely. During a radio interview, I was asked about the appropriateness of Satish’s being a paediatrician, given his own experiences as a child. I’d never made the connection before. It felt almost as if I’d made that choice for him in the way he might have for himself, unconsciously: Satish caring for his own small self. It felt very…Jungian, would you say? Please feel free to correct my ignorance here, if need be.

I don’t know about Jung, but it’s consistent with Kleinian theory that people often seek out the caring professions in an unconscious attempt to repair some actual or perceived damage to our infantile selves. I’m assuming you made him a doctor for the sake of the plot, but all along there was another layer that was so right for his character of which you were unaware. Was it then (and moments like it) when you realise you’ve created something that has an existence of its own, something greater than the sum of its parts? I wonder if you think it would have made a difference if you’d seen this connection when you were writing Jubilee and whether Satish would ever come to a similar derstanding for himself?

I think we often write as we live – prompted by the unconscious. I’m glad Satish doesn’t realise his own motivation, because I think it would have made it a flatter book emotionally. I believe there have now been studies of how the brain works when you’re creative; what they found is what writers have always known anecdotally: that when you step away from a creative problem, the unconscious works to solve it. That’s why writers need to protect their non-writing time, and why sometimes ideas seem to come out of nowhere.

What was the biggest challenge for you in writing Jubilee?

The biggest challenge was probably not to do with the obvious things (writing outside my own ethnicity, gender, age) but more about the process of writing when you have no idea you’ll ever be published. A novel requires a lot of graft, a lot of edits, and to do that for years – to keep grafting when you don’t know the outcome – is the biggest challenge with your first novel. I wonder how many great novels are out there which we’ll never read because the author gave up too early.

There’s something for me in what you’re saying here about trust: trust in yourself, in your characters and in the process, even if you don’t fully understand it. What kept (and keeps) you trusting yourself as a writer where others might fall by the wayside?

Honestly, it was about twenty percent faith in the story I wanted to tell, and about eighty percent doggedness and work ethic. When everything else – including trust - fails, I can at least work. I think it was Philip Pullman who said: to succeed you need talent, luck and hard work. You can only control one of those. So that’s what I fall back on.

Why this hard work as opposed to some other? What is it that drives you generally, then, as a  writer?

I’ve spent ages drafting answers to this question, and every answer sounds Californian. I can only offer the following: that I’m a very ordinary person, and this is the only thing I do which is not ordinary. That writing prose is a deep and consuming pleasure, and that when you create a fictional world it gives you a kind of control you never have in the ‘real’ world. You can bring closure, ensure a happy ending – or understand the unhappy one. There’s something in that, I think.

Californian or not, a lovely answer, reminiscent of the way A S Byatt has spoken about her writing, I think, and one which also leads me back to Satish. The Jubilee party reunion forces him to face the fact that he’s not as much in control of his life as he might have thought. What did you find most appealing about a main character  who’s been running away from his past?

I liked the opportunity it gave me to explore how memories come back to us – sudden clear flashes amid all that we’ve forgotten - how they ambush us, how our current lives are inextricably bound to our younger selves. I’m really interested in how we make treaties with the past so we can get on with the future.

There are some interesting, and amusing, posts on your website about getting published (I particularly enjoyed the one about the book covers), but I’d like to take you back to the stage before that, when you were still looking for representation.  After winning the Friday night competition at the Writers’ Workshop Festival of Writing, you found yourself courted by agents. Yet it must’ve been quite a challenge to select the right 500 word extract to reflect your novel’s qualities; how did you go about it?

I thought about it quite carefully. I worked out that dialogue from multiple speakers would confuse the audience, and that unbroken narrative didn’t provide enough texture, so I chose a passage which was really a two-hander, with some description to set the context. That context was important – I didn’t want to have to over-explain before I started reading, so I made sure the section could stand alone and was fairly self-explanatory. I also chose a piece which ended on a (gentle) cliff-hanger, so listeners would want to hear more. Then I practiced, and practiced, and practiced.

What’s next in the pipeline?

I’m (just about) on the home straight with my next novel, a story about a woman who has a midlife crisis and deals with it in an extraordinary way.

Is there anything else you would have liked to have asked you (and, if so, could you politely pretend that I have, and give me the answer)?

Thanks for sharing your reflections and I look forward to reading the next novel.

uploaded 15 February 2013
Your comments are welcome on any of the Q&A's – click here to post.
See also my post on the role of food in novels inspired by the connections between Jubilee and The Lighthouse